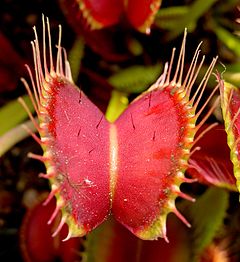 Many people are not aware that hundreds of species of carnivorous plants exist. In order for a plant to be considered carnivorous, it must be able to lure, capture, kill, and digest prey. The most famous carnivorous plant is the venus flytrap. The venus flytrap has a diet comprising arachnids, insects, caterpillars, and slugs. The venus flytrap attracts its prey with a sweet nectar in its trap mechanism. On the leaves forming the trap mechanism there are many small hairs that serve as triggers for the trap. In order for the trap to go off, more than one hair needs to be touched in succession; this double-tap requirement allows the plant to distinguish between prey and other debris. Once the trap closes, the prey is sealed very tightly and various acidic, digestive juices are secreted. The prey is digested fairly quickly and the plant absorbs the nutrients within. This four step process—attract, capture, kill, and digest—is standard for all carnivorous plants.
Posted by Unknown at 9:52 PM