How to read the moon phase 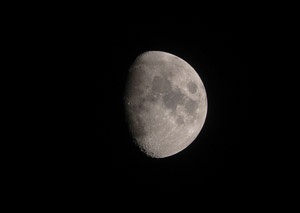 Reading the moon phase is very simple. The 29.5-day moon cycle starts with a new moon, when no moon is visible to us because it is located between the earth and the sun. Next begins the waxing phase, when the moon transitions from a new moon to a full moon. The waxing phase is called "waxing" because the moon appears to become larger. As the moon reveals itself in the shape of a crescent, it is called a waxing crescent. The next phase is often referred to as a half moon, but the correct term is first quarter moon, when only the right half of the moon is visible. The next phase is called a waxing gibbous, pictured above. Next comes the enemy of the superstitious, the full moon. When the moon is full, the waxing phase ends and the waning phase begins. The waning phase occurs when the moon appears to be disappearing. The waning phases are flipped versions of the waxing phases: the waning gibbous, third quarter (another "half moon," this time only the left side of the moon is visible), waning crescent, and lastly the new moon. With the appearance (or rather disappearance) of the new moon, the moon cycle is complete.