Is sea salt a healthy alternative to table salt? 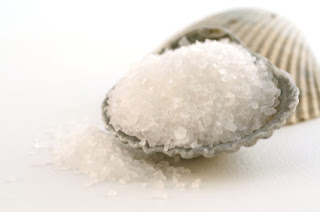 Contrary to popular belief, sea salt is not a healthy alternative to table salt. In terms of nutritional value, the two options are essentially equivalent, as they contain the same amount of sodium. There are, however, distinctions between the two additives. Sea salt is obtained by simply evaporating sea water. Usually no formal processing of the sea salt is performed, which can result in it containing a number of minerals. These minerals give sea salt a different flavor than table salt, its processed counterpart. Table salt is obtained by mining salt deposits and is usually processed to remove many of the minerals found in sea salt. The only other notable difference between sea salt and table salt is texture. Sea salt is large (relatively), rough, and rigid whereas table salt is small, refined, and consistent. One good thing about sea salt, though, is the fact that it is all natural.
Posted by Unknown at 1:25 AM