Origin and purpose of the AMBER Alert 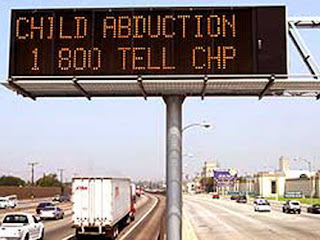 The AMBER Alert was named after Amber Hagerman, the soon-to-be-ten year old girl who was kidnapped and murdered in Arlington, TX in 1996. Fort Worth radio broadcasters and the local police department developed an early warning system to apprise the public of child abductions. Communities around the nation followed suit and developed their own warning systems. Today, AMBER has been adopted as an acronym for America's Missing: Broadcast Emergency Response. AMBER Alerts are distributed through a number of different outlets, including cells phones (via SMS), email, televisions, public billboards, and radio. The statistics on kidnappings that lead to murders are troubling, and they prove that every second matters in abductions. AMBER Alerts were developed in response to this realization, and they help to prevent as many "unhappy endings" as possible.
Posted by Unknown at 9:29 PM