Why do athletes yawn before their performances? 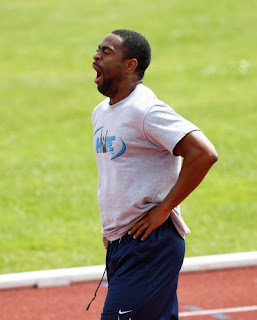 If you are watching the 2012 London Olympics and paying attention to the athletes before they perform, you may notice that many of them yawn right before the start of their event. This phenomenon is common and has been researched extensively. Although yawning is not fully understood, research indicates that it is a thermoregulatory behavior. Specifically, yawning acts as a cooling mechanism when the brain gets too hot. When we yawn, a rush of cool air is taken in; this air is believed to cool the brain through the mouth's palate. The brain is often described as a complex computer system, and like the non-organic computers we have today, it works most efficiently at a cool temperature. By cooling the brain, yawning is believed to revitalize the senses and increase concentration. What better time than right before an athletic performance to increase one's focus and alertness? Most athletes yawn naturally before their events, but others induce their yawns for the seeming benefits. Yawning can be induced by seeing others yawn, reading about yawning, or even thinking about yawning. Have you yawned yet?
Posted by Unknown at 5:00 PM